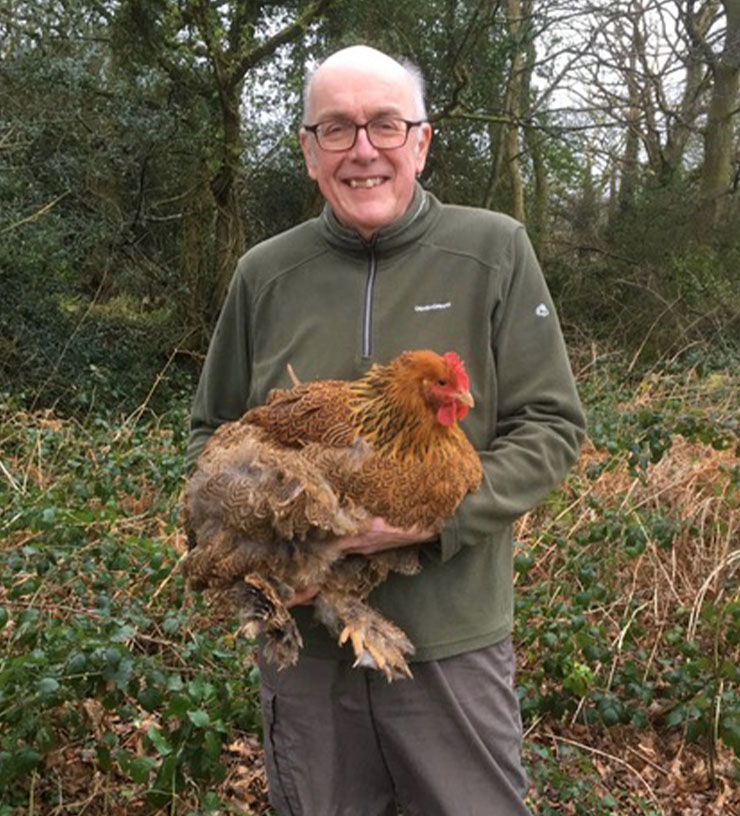 President of the Cochin Club

I had the honour of being elected the Club President in 2015. Everything I have done with Cochins I have done with my wife Denise. We saw our first Cochin together in the early 1980s and it was together that we purchased what turned out to be the foundation of our present Partridge Cochin flock as hatching eggs in 1985. We joined the Cochin Club in 1987 and as a family have enjoyed the warmth and welcome of the Club from that day to this. We have dabbled with Black and White over the years but Partridge is the colour that first won our hearts and still has us well and truly hooked.
The Cochin has it all, classic form, grace, beauty and a colour for each day of the week! Our main aim as a Club is to conserve and foster the Cochin breed as represented by the Standard of Excellence in Great Britain. I’d like to think that we are a friendly and approachable group of people and if you keep Cochins or simply love them from a distance then please do join our Club! 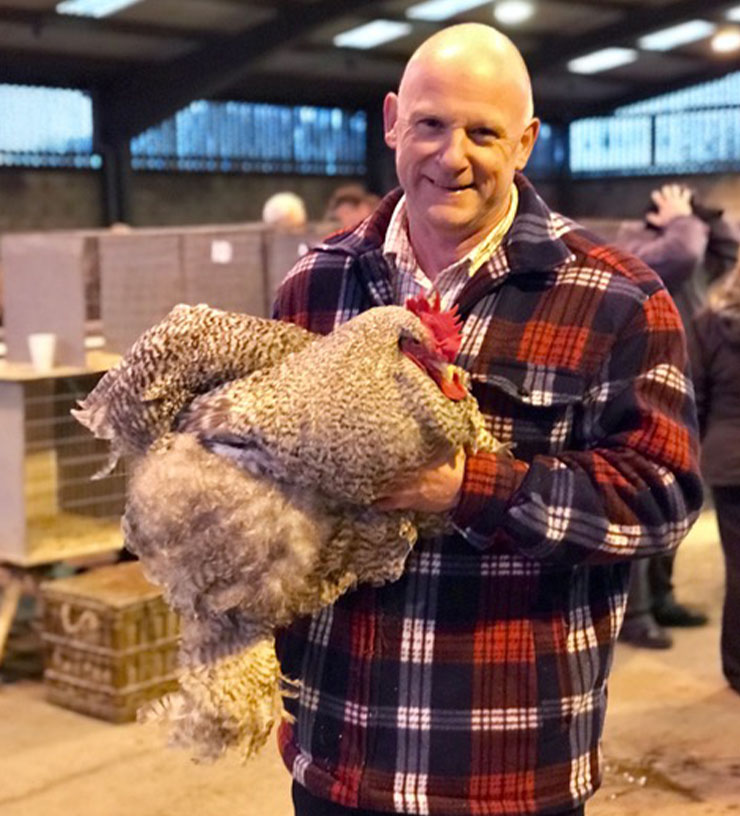 I began to study “cochinology” several years ago following a chance visit to Jack Killeen’s “Heather Bank”. A friend was going to purchase some young Partridge Cochins and invited me along saying “I would find it interesting.” How right he was! Being suitably impressed with both the size and majesty of mature Cochins and Jack’s no nonsense approach to doing a deal, the next day I contacted him to enquire if he had any more to sell? Only some young blacks were available, so a trio was purchased. From then on, under Jack’s guidance, over the next few years as our friendship developed, other colours were acquired including Partridge, buff, white and mottled. All were Jack’s strains which I always regarded as “on loan”, so if he encountered any disasters the bloodlines were still available to him to retrieve birds and carry on. This preservation continues today with the occasional addition of new blood.
As with many things in life I find there is always something new to learn, hence the coining of the word “cochinology”. The definition of an “ology” is “a subject of study; a branch of knowledge” so it seems quite apt.
To be Chairman of such an historic society is a privilege and I look forward to meeting fellow “cochinologists” both young and old, learning from their combined knowledge and making sure that this friendly and welcoming Club continues its success! 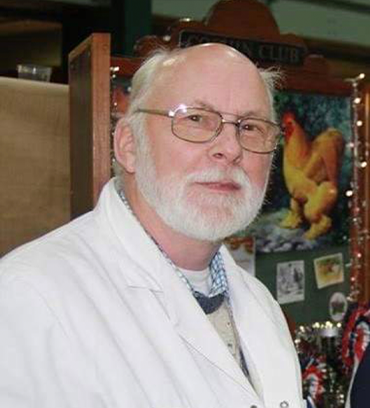 Gill and I have been keeping and showing poultry for over 40 years starting with general farmyard bantams. I started showing with Gold and Silver Sebrights winning a few minor prizes here and there. Next came White Pekins which we did very well with: best achievements were winning Best in Show with a White Pekin female at the Yeovil Agricultural and Pembrokeshire Agricultural shows in 1991.
In the early 1980s my Uncle, Tom Ayres, persuaded us to have a trio of White Cochins from him and these were bred from and the offspring were shown by Gill. “Fred” and “Freda” went on to win many prizes over a couple of years, in fact winning many shows that Tom used to win. Greatest achievement was Best in Show with Freda at Gillingham and Shaftsbury show in 1986 she also had a Championship Row place at the National Poultry Club Show. We also had Large Dark and Bantam Gold Brahmas from Chris and Maureen Dart. They were big breeders of Cochins, Brahmas and other breeds.
Over the years many cups and rosettes were won and a friendly rivalry between us, Tom and Margaret Ayres and Chris and Maureen Dart began. We were all members of the Cochin Club.
We have seen many faces come and go since the early 1980s but are glad that there are now lots of new people full of enthusiasm for the Cochins who are doing all they can to promote this gentle giant of a breed.
We still have White Cochins and Brahmas and even though not showing as much now we will have them for as long as we are able to keep them. 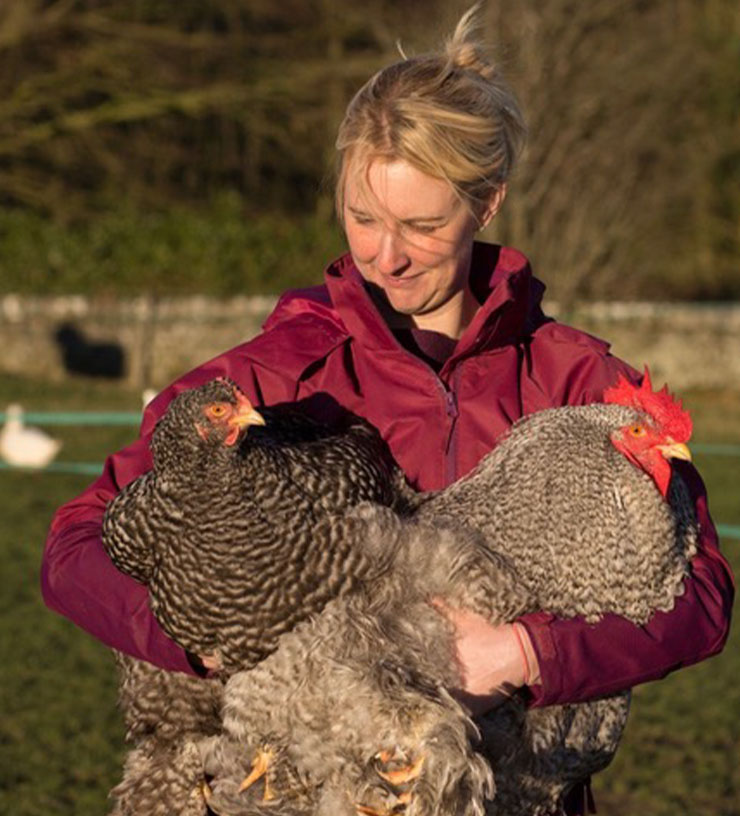 I was newly appointed as Club Secretary at the AGM in 2018. I have kept Cochins for the past five years having first fallen in love with a trio of Partridge I purchased from a local auction, I was on the lookout for a larger breed of bird that could cope with the harsh winds and weather conditions we experience on the Yorkshire moors, the Cochin fitted the bill and it was there the obsession started. I now keep and show, with my two sons’ help, Partridge, Cuckoo, Black and Whites. With the assistance from long-established breeders over the years I have been lucky enough to gain some good bloodlines in my flock, along with learning from their wealth of knowledge and experience. I can truly say it is a privilege to be part of this great Club and be amongst good friends who share the passion for these wonderful birds. If you wish to find out more about this wonderful breed or to join the Club, please contact me and I would be delighted to help.