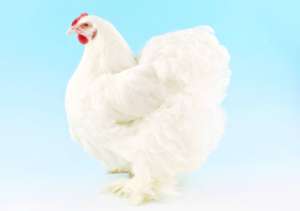 Male : Massive and deep, his carriage rather forward, high at stern and dignified.

The Body should be large and deep. Back should be broad and short. The saddle very broad and large with a gradual and decided rise towards the tail forming a harmonious line with it. The breast broad and full, as low down as possible. The wings small and closely clipped up, the flight feathers being neatly and entirely tucked under the secondaries. The Tail should be small, soft with as little hard quill as possible and carried low or nearly flat.

The Head should be small, the beak should be rather short, curved and very stout at the base. The Eyes are large and fairly prominent. Comb should be single, upright, small perfectly straight, of fine texture, neatly arched and evenly serrated, free from any lumps and

Cochin Standard
bumps, face smooth and as free as possible from feathers and hairs. The ear lobes should be sufficiently developed to hang nearly as low as the wattles, which are long, thin and pendant.

The Neck should be rather short carried forward, handsomely curved and thickly furnished with hackle feathers which flow over the shoulders.

Legs and Feet, the thighs should be large and thickly covered with fluffy feathers standing out in a well rounded fashion, hocks entirely covered with soft curling feathers but as free as possible from any stiff quills (vulture hocks) The shanks short, stout in bone with long plumage beginning just below the hocks and covering front and other sides of shanks from which it should be outstanding the upper part growing out from under the thigh plumage and continuing into the foot feathering. There should be no marked breaks in the outlines between the plumage of these sections. The Toes should be four in all, well spread and straight with the middle and other toes heavily feathered to the ends. Slight feathering of the other two toes is a good sign to breeders. 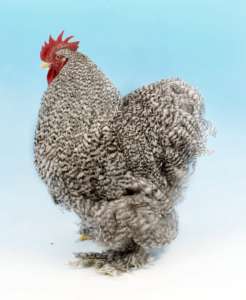 Female plumage: One even shade of blue free from lacing, pigeon blue is preferred.

In both sexes: Beak is yellow, horn or yellow slightly marked with horn. Comb, face, ear lobes and wattles are bright red. Eyes dark. Legs and feet blue with a yellow tinge in pads.

Male plumage: Breast and under parts any shade of lemon-buff, silver-buff or cinnamon provided it is even and free from mottling. The head, hackle, back, shoulders, wings, tail and saddle may be any shade of deeper and richer colour which harmonises well (lemon, gold, orange, cinnamon). Wings to be perfectly sound in colour and free from any stippling with a lighter colour. White in the tail is very objectionable.

Female plumage: Body an all over shade, free from mottled appearance. Hackles of a deeper colour to harmonise, free from black pencilling or cloudiness, cloudy hackles being especially objectionable. Tail free from black.

In both sexes: Beak rich yellow. Comb, face, ear lobes and wattles brilliant red. Eyes to match plumage as nearly as possible, red eyes are preferred although rare. Legs bright yellow with shade of red between the scales.

Male and female plumage: Pure white, free from any straw or red shade.

Male and female plumage: Dark blue-grey bands across the feathers on blue-grey ground. The male’s hackle should be free from gold or red tinge and his tail free from black or white feathers.

Male plumage: The neck and saddle hackle rich bright red or orange-red, each feather with a dense black stripe. The back, shoulder converts and wing bow rich red, of a more decided and darker shade than the neck. The wing converts green-black forming a wide and sharply cut bar across the wing. Secondaries rich bay outside, black inside, the end of every feather black, primaries very dark bay outside and dark inside. Saddle rich red or orange-red, the same colour or one shade lighter than the neck. The remainder glossy back as intense as possible. White in tail objectionable.

Female plumage: Neck bright gold, rich gold or orange-gold, with abroad black stripe in each feather, the marking extending well over the crown of the head. Remainder. Including leg feathering brown, distinctly pencilled in crescent form with a rich dark brown or black the pencilling should be perfect and solid up to the throat.

In both sexes: Beak yellow or horn. The comb, face, ear lobes and wattle are bright red. Legs yellow, but may be of a dusky shade.

Primary wing feathers twisted in their axis.
Complete absence of leg feather.
Badly twisted or falling comb.
Black spots in Buff.
Brown mottling in partridge males or pale breasts with no pencilling in partridge females.
White or black feathers in cuckoos.
Crooked back, wry tail or any other deformity.